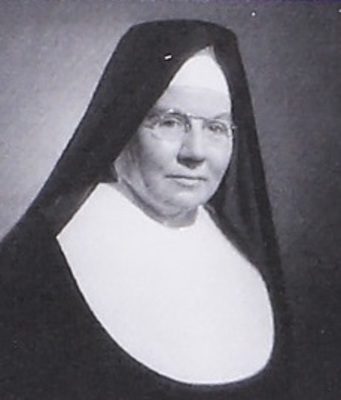 Clemence Noble was the first Fontbonne student to enter the Sisters of St. Joseph. After graduation from St. Joseph's Academy and two years at the college, she joined the religious community in 1926. Sister Mary Alfred returned to her college in 1931 to teach psychology. After completing doctoral studies, she spent the next 25 years between Fontbonne College and the College of St. Teresa (Avila), Kansas City, Missouri as teacher or administrator -- serving as president in both schools.

As Fontbonne's president, Sister Mary Alfred demonstrated a special concern for the lay women and men on the faculty and staff, as she systematically improved the salary scale. For greater efficiency, she reorganized the administrative structure and worked toward the clear separation of college and religious community. Looking back on her presidency, Sister Mary Alfred acknowledged that the building of the library after so many years of anticipation was the high point of her Fontbonne tenure.