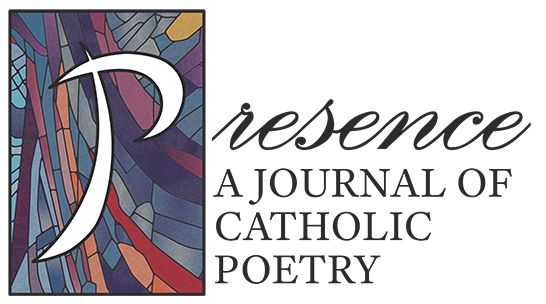 Presence: A Journal of Catholic Poetry is a venue for publication of poetry written by authors whose work is informed by the Catholic faith. As Thomas Aquinas suggests, art is a good in and of itself, and the artist is primarily concerned with the goodness of his or her creation. Thus, the primary principle for inclusion in the journal is artistic excellence. We publish poems on the basis of their artistic merit, rather than on the basis of the author’s professed creed or because the subject matter is explicitly Catholic.

Work that is informed by Catholicism contains key theological assumptions, the chief of which is the operation of God’s grace in the world, working through natural means, yet transcending it as well. The poems in this journal convey God’s presence in any number of ways—by exploring the intersection of matter and spirit, by depicting the struggle between belief and doubt, by questioning the faith, being surprised by it, taking joy in it, even finding humor in it.

The journal seeks to show the wide variety of ways God’s presence is communicated to and experienced by human beings and, in so doing, hopes to create a community of writers who recognize Catholicism as fertile ground for the flourishing of contemporary poetry. More information about Presence and how to subscribe is available here: www.catholicpoetryjournal.com.

Editor's Note
Despite some important differences among Christian denominations, much common ground exists, and so, I anticipate that this journal will necessarily assume ecumenical tones where poems from traditions, such as Orthodox and Anglican, intersect in ways not inconsistent with Catholic faith. Some poems may even contain a kind of dialogue between Jewish and Christian voices or atheist and Christian, for example. Our mission is to accept poems on the basis of their artistic merit, rather than on the author's professed creed.

This subscription was made possible through a donation from Nancy H. Blattner, former president of Caldwell University.

Printing is not supported at the primary Gallery Thumbnail page. Please first navigate to a specific Image before printing.