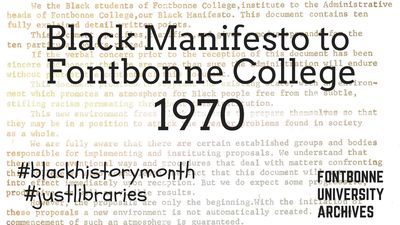 This is the list of demands by the Fontbonne 8, the eight women who occupied the library, to the administration. They recognized not all of the changes they demanded could be implemented as they wrote this in the Black Manifesto. However, their goal was to start the chain of changes that would promise the change of atmosphere in terms of the racial divide at Fontbonne. Some of their demands were met. while others, like establishing an African-American studies major, were not implemented until as late as 2014.